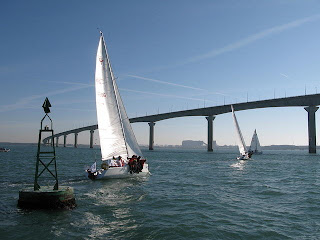 Team Canada moved up from 8th to 6th with some consistent results.

The day started off with a distance race which took the teams under a bridge. Like the previous distance race, the team sailed the 32 foot keel boat like a laser, and surfed their way to the top three. After a perfect rounding, the team realized the sheet had come loose and got caught in the rudder. Lucky for us, it didn’t affect Dirk’s steering too much. Unfortunately, most of our distance races have been about one thing. Start, first upwind, then SPEED SPEED SPEED SPEED.

With some distrubed flow and dragging lines, the team lost only two boats. Finishing 6th. Once again, birthday luck followed us through to the next race. The race committee, usually incompassionate to break downs, gave everyone an HOUR long break. It was heaven…well heaven everyone but Landon, who had to dunk his head in the water while trying to unwrap our rudder. After some shivers, and blue lips Landon “the colonel” Gardner warmed back up just in time for the next race.

Port tack layline. Top Three. Fouled Portugal. 720. Last place. Super fast and great moves bring us back into fourth. Lucky for us, the Japanese were in front, so we knew third was locked. And not surprisingly, after an hour glass and running over the mark, we soon found ourselves just hoping the Japanese team would finish the race.

Another great first upwind and start. A speedy downwind had us in third going into the last windward beat. With 12 boats attacking from all sides of the course, team canada did their best in covering, and working the shifty conditions. The strategy worked out as best as it could, with only one boat passing them at the layline. Forth place finish was the result. High Five!

Engine still not working, so the crew let Dirk and Ethan fly the chute. It was looking good until they had to douse. After Dirk got lost in the chute, fell in the hatch and punched Ethan in the face, the two decided they would stick to thinking rather than doing.

That’s it for now.